Books have always played a role in my life. My mom, an avid reader, passed on her love of books to me. When I touch a book and I am conscious of a world that exists only within those pages. A self contained world whose influence is in how I interpret the words. Everything we are and everything we know about the world is contained in a book somewhere. Books are precious.

I do not consider myself to be a “book artist” in the true sense. I do not create books. I am a sculptor that disassembles, deconstructs books and marries them with found objects. I play with puns, double entendre, symbolism and satire and there are so many when it comes to books. For example, the work in Jackets. Books have jackets just as jackets are articles of clothing for us. Some of the pieces where created to emulate “jackets”. Clothing is a reflection of who we are and books help shape who we are.

no images were found

My statements are subjective and have open-ended interpretation. I want the viewer to be able to bring their own experiences to the work. I want you to find meaning in my work that is significance only to you. In that way the work becomes yours, personal and intimate. 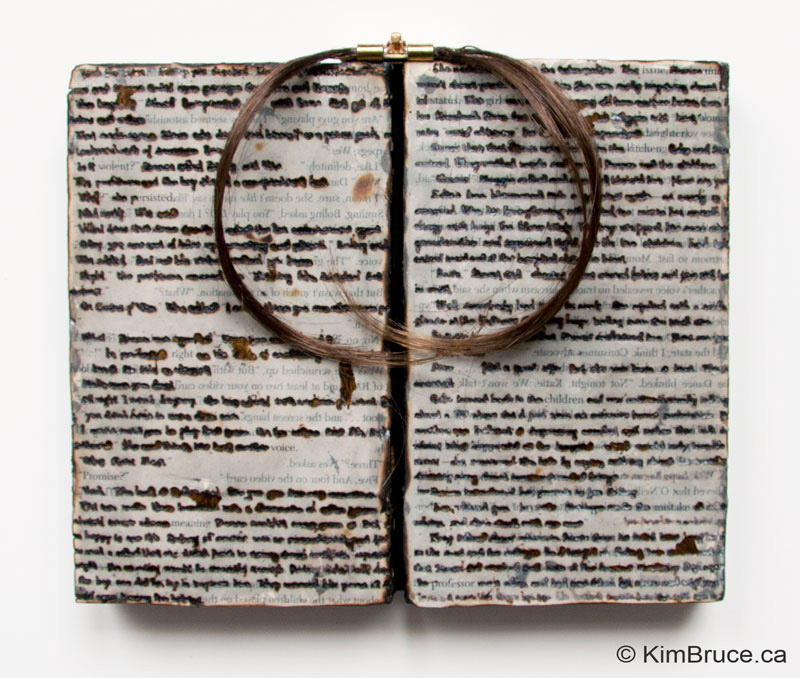 The first in my series dealing with books was called Open Book. The work was created with wood where I emulated an open book with focus on the central spine. A strong vertical line is prevalent in a lot of my work and has to do with having strength – backbone. In essence strength of character.

As the work progressed it took a turn and has to do with my process. I work intuitively, spontaneously, totally in the moment without much of a plan. I don’t use a sketchbook to record or work out ideas. I let the work, work itself out. Some take longer than others to find their voice, some never do, others can’t keep their mouth shut. It is through this process of intentional intuitiveness that I realized I was starting to seal the books shut, closing them off, making them inaccessible, unable to open. That was when I realized what the work was truly about.

I was using books as my canvas because books are knowledge and knowledge empowers. I looked for a book term to describe what I was doing. I chose Disbound.

DisBound is an exhibition about education for girls. It’s about choice. It’s about girls, and boys too, but mostly girls, who, due to tradition or religion, don’t get to choose. They are married off as soon as they hit puberty and often left to fend for themselves and their children because of war, strife or circumstance.

Gender inequality exists. It exists in Canada, the USA, throughout the western world, but is most prevalent in developing nations. I want to bring awareness to the importance of education and the role it has in shaping future generations. If girls are educated and given choices, they can influence the world.

DisBound is a bookbinding term that means to remove the book pages from its bindings; I use it as a metaphor for removing girls from the bonds of tradition so they can get an education. Disbound should not be confused with unbound, which, is a bookbinding term used to describe pages that were never bound to begin with.

As with all my work, this series of books, references the dichotomy of my early life expectations to conform to a traditional woman’s role, when in fact, a reality for me, was the need to be self-sufficient and support myself as an entrepreneur and business owner. These contradictions allow me to expose my private self through veiled metaphor, creating objects significant beyond function. The under-laying message – the essence of my work – speaks to the roles and rights of girls and women.

I truly hope you will find meaning in the work.

2 thoughts on “Disbound – Education for Girls”